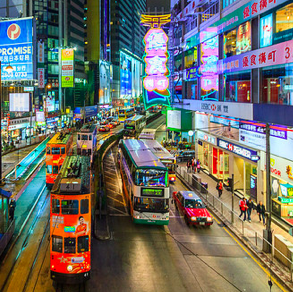 I’m not actually sure I’ve been to Hong Kong 100 times, but that’s probably a close guess. HKG is my most frequently visited international airport, and more often than not I’ve stayed over for at least a day or two.

In all of the visits, I’ve stayed in just about every possible range of accommodation.

On my very first visit, when I first made the decision to travel to every country in the world, I stayed at the Star Guest House. Fun place! As I recall, it cost about $30 a night. I arrived late at night but was—per usual—wide awake due to flying from Seattle via Seoul.

I took the airport bus and walked onto Cameron Road in wide-eyed wonder. Here I was! Hong Kong!

I went back to the Star and its next-door neighbor, Lee Garden Guest House, several more times in the next few visits. But then, when seeking to stay in a slightly different area, I decided to upgrade myself all the way to the YWCA.

I’d learned from Singapore, where I stayed at the YMCA, that such places tended to provide good accommodation for a lot less than name-brand hotels. And indeed, the YWCA fit the bill for me on another half-dozen visits.

On other stopovers, I stayed at hotels—probably at least two dozen of them, ranging from one-star to five-star, some boutique properties, others Chinese or Korean brands, and others international brands. My favorite from this era was the Langham Place, which I haven’t been back to since but really liked.

One time I arrived without a reservation and took my bags to the Mong Kok area, which is authentic and awesome. On previous walkabouts I had noticed a number of cheap hotels that rent rooms by the hour or the night.

I didn’t need the room for its usual purpose—I actually wanted to sleep, and preferably for much of the night. I quickly learned that this plan wouldn’t work. As soon as I showed my face, every place I went to immediately turned me away. At first I thought they were just full, but after it happened over and over, I got the idea: this wasn’t the place where a foreigner should come alone and spend the night.

Oh well. I went back to the YWCA, my old haunt, and fortunately they weren’t fully booked.

Whenever possible, I grabbed a blanket (or perhaps two) from a connecting flight, then camped out until my favorite lounge The Wing opened at 5:30am.

These days I have a new ritual: if staying two nights, I spend the first night at the W Hotel, also known as “one of the few W’s in the world that is actually nice.” (Others that come to mind are in Bali, Doha, and Taipei. Never the ones in America or the UK.)

My headshot photo for the new book (also used on my Twitter profile) was taken in the lobby.

I’m always jet-lagged in Hong Kong. Always. Inevitably I’m arriving from Europe or the U.S., or once in a while South Africa—all destinations that are many time zones away. Accordingly, I have some nighttime rituals, including a sleepwalk through Kowloon.

For a long time I had another practice: every time I’d visit, I’d revisit a familiar stomping grounds, and I’d also go somewhere I’d never been.

On my latest visit, I set out to walk around Kowloon, with the intention of finding a new neighborhood or at least a new set of side streets. It was no use. I kept coming to the same places I’d been so many times, obviously taking the same turns and walking patterns I’d taken before, without realizing it until I was underway.

There was the Star Ferry terminal. There was Nathan Road. There was the old Star Garden, which never gave me Platinum status or a $50 comped breakfast, but felt luxurious in its own way.

I have a daytime ritual here too: drink lots of coffee. Fortunately, this is easily accomplished in Hong Kong, with coffee shops approximately everywhere.

Yep. Back in the stomping grounds. I’ll head out of town again tomorrow, but i know I’ll always be back.

Tags: Hong Kong, Hotels, on the road, sleeping in airports

The Wing by Cathay Pacific at Hong Kong International Airport

On the Road Again: Next Stop, Southeast Asia
© 2023 The Art of Non-Conformity | Site by Bytegrow Technologies