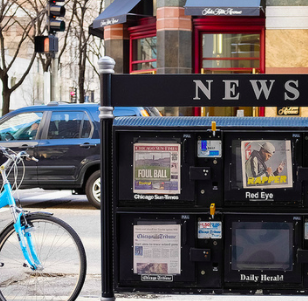 I used to read the news every day—a lot of news, from a lot of different sources. But after the election, quite frankly, reading the news made me depressed. I went on a media fast and put my head in the sand, largely out of shock and dismay but also for general self-preservation.

As time went by, I struggled a bit with this position. I didn’t feel like I was missing the pleasure of keeping up with events that caused me internal distress. In fact, I actually felt better in not knowing which particular racist or anti-science person was being appointed to various positions of high influence on any given day. And all of a sudden, I had a lot more time!

Still, I don’t want to be completely uninformed, especially in the midst of our country’s institutions being torn to shreds.

And I think here’s what it comes down to:

I’ve thought about this concept a few different ways since November, and that image (thanks, Jessica) presents the reality in a particularly cogent manner.

I represent the far-right of the spectrum on this graph (for the record, the only far-right I represent…). Even though I’ve done nothing to deserve such privilege, I have the ability to ignore a lot of the current news. My life is not directly affected by the current climate of attacks and antagonism.

Or to put the stakes in perspective: if I say something that causes annoyance to those who defend the indefensible, maybe I’ll “lose followers.” Other people are losing (or have lost, or are at risk to lose) much more.

Therefore, I’m still not reading the news for pleasure—for it brings little pleasure—but I’m paying attention through other means: not skipping over headlines I come across online throughout the day, following the trending tags on Twitter, and speaking up whenever something particularly egregious seems noteworthy of objection.

So in other words: I used to read the news for enjoyment. Now I pay attention because it’s the right thing to do.

My question to other leaders—and we are all leaders in some way—is: how are you using your privilege? What will you tell a future generation that asks, ‘What did you do?’

Even if you feel powerless, as a leader you have some sort of power. Find a way to use it for good, to speak up against injustice and in favor of a better world. If you’ve ever longed for a time when your voice matters and you have a chance to take a stand, here it is.

Tired of Negativity? Try a Newspaper Full of Good News

6 Discoveries from Near and Far: Volume XLV