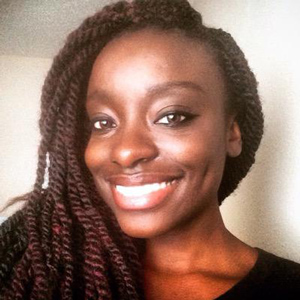 I am a scientist, writer, and entrepreneur originally from Nigeria. I am both analytical and artistic, and I tend to be childlike—so I’m always laughing and I’m always curious.

My curiosity is actually what led me to my quest: to interview one stranger every day for a year.

I have always been fascinated by the way we do not know our neighbors in Canada and America. We share a weird intimacy, sitting next to each other on the bus or living next door to one another, yet we remain strangers. It was different in Nigeria – people are practically family with their neighbors.

On top of that, I realized I had questions for the people around me. Everyday, when I was coming back on my long bus ride from work, I would wake up from my thoughts and daydreams and look around, and wonder what was in the mind of the person beside me on the bus. What were their worries, fears, hopes, successes, joys, dreams?

I had to know.

Why do you suppose Americans and Canadians are less apt to talk to one another?

I think it may be because they can get around their day without really needing to interact with each other. In Nigeria, there are always reasons to run into people, from social functions to family gatherings. People are seen as part of your wealth.

Also, I would say that people need each other more in Nigeria. The systems there are much less seamless. Here in America, since everything is automated from shopping to busing to learning, you don’t really need to ask for directions, or help, or even to cooperate to get things done.

And then the culture of individualism in America may play a role. As we become more urban, and moving from place to place becomes easier, we all become nomads of a sort. This can lead to being less connected to the places and people we are surrounded by.

Did any ways to remedy this stranger-nation come to mind during your quest?

I think one remedy would be finding ways to genuinely care about people and be fascinated about them. Find a way to learn more about the places we are part of, connect to their history, and being active in local activities is a good place to start.  If you’re feeling bold one day, talk to your neighbors or to strangers.

This fundamental shift would allow us to have a stronger sense of connection in our neighborhoods, and we would see relationships not just as something to use for a specific purpose but as an investment.

Were there costs associated with interviewing strangers?

Not really. I already owned a smartphone and a computer, which I used to document and share the stories I heard. My main cost was transportation to leave my home and talk to people in different parts of the city.

What exactly did you ask people?

I wanted to know what they were thinking and who they were. I asked questions like:

The very first person I asked to interview, on January 1, 2013, was standoffish. His reaction made me feel like I was suspicious and stupid – which made me even more nervous to approach other strangers.

Rejection continued to be a struggle for me for awhile. An older woman refused to let her husband talk to me because she seemed concerned I was hitting on him. People said “no” to my request to talk to them for a lot of reasons: they were shy, busy, hadn’t made themselves up, were afraid. There were some days where I could get many no’s in a row and want to cry.

I dealt with it by pushing forward anyway. Even when I was nervous – especially then. The only cure to the nervousness was just to go ahead and talk to people without thinking!

And when people did finally talk to me, they were often nice, interesting, and made my perseverance totally worth it.

Did you wind up connecting with any of these strangers outside of the project?

In some ways, the connections were seemingly small. I started to recognize familiar faces in many places I went. I’d see the woman who didn’t want to be on camera because she didn’t like how she looked, the man who thanked us for asking him to share, a hippie in Seattle who told me he loved me. We are all so tender and vulnerable.

Some connections did run deeper. I made friends with a painter in a park in Calgary, and we would get together until I moved – so now we mainly stay in touch on Twitter. A lady in Lagos who I interviewed stays in touch too – we got to have pizza together in a non-interview setting before I left.

One of my favorite stories is a woman I met in Nigeria who owned a bakery. As a surprise to my dad, I ordered a cake from her and had it delivered to him in Lagos on his birthday.

Tell us about an encounter that sticks out in your mind.

I was having a bad morning in Seattle – I’d missed my flight. So I made the best of the day and went to Alki beach, where I met Ray.

Ray had lost half his skull in an accident. He made jewelry by the beach and was very happy and content. He told me about life, gratitude and he told me and my friend that he loved us. For some reason, I believed him when he said it.

He made me wonder: on one hand he maybe be seen as some ‘crazy’ hippie, and yet on the other he had come to peace in life that so-called ‘normal’ people don’t always find. And that paradox stays with me – who is crazy and who is sane?

What surprised you along the way?

The outpouring of support I got from friends was a huge surprise, and an inspiration to keep going. I’d assumed this was just a quirky project of mine, but then friends told me they looked forward to reading my blog and watching the interviews.

Even more surprising was that people were inspired. One friend decided to interview a stranger in her own city. And another decided to go outside her comfort zone and approach her city with new eyes by trying new things, visiting historic sites, and going out to do things instead of living in the rut of work and home.

It felt as though I were on this quest with many people’s smiles behind me.

I’m currently starting a doctoral program and launching a non-profit, so after a while I couldn’t interview strangers every day any more. I decided to transition my blog into a space to write and interview people I find fascinating once a month.

What made you decide to continue your quest?

Perhaps it’s the scientist and writer in me, who likes to try, see, and to discover. I like to learn and challenge myself; it is the way I grow and the way I fall in love with life.

I wanted to keep interviewing strangers because there are all these cool people in the world that you may never get to know exist until you reach out. And you could wind up being friends, learning something new, or  or just inspire yourself to try new things by connecting with new people.

Funny enough, it turns out that my doctoral research seems to be relating to this as well: I’ll be looking at how the physical and social aspects of the built environment affect risk behaviors for chronic diseases. I would like to use this to inform policy change for better health outcomes as we see high rates of unplanned urbanization in many cities around the world.

Cities tend to be connected to the best and the worst possibilities, and I plan to continue exploring this to see how the potential in cities can be designed for good economic, health and social development.