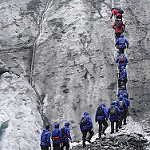 Once there was a student preparing to send in an application for admission to the local university. She spent hours answering the questions and preparing the additional materials, but stopped when she came to the final question:
“Are you a leader?”

She felt like she had never led anyone before, so she answered the question with an honest “no” and sent in the application. She knew the university was looking for leaders (they had said so in their advertising), so she did not expect to be admitted.

A few weeks later she received this response from the admissions committee:

This year the university will admit 1,455 new leaders to our incoming class. We thought all those leaders would need at least one follower, so we are pleased to grant you admission.

Wherever you look, you’ll find no shortage of leaders and would-be leaders. Amazon offers more than 300,000 books on leadership. You’ve got charismatic leadership, primal leadership, guerrilla leadership, and countless other adjectives wrapped around the pursuit of leadership.

It’s not strictly a Western phenomenon. From walking the streets of places like Bangladesh, Nigeria, and Cambodia, I can report that these kinds of books are highly sought after around the world. The secret, it seems, is to put the word “leader” in your title to make it more successful.

Everyone wants to be a leader, it seems, but here’s an idea: why not be an influential follower?

More than anything else, changing the world requires strategic, dedicated action, but your strategy can be greatly improved through research. In the early stages of my legacy project, I did a lot of following. I was impressed with Steve Pavlina’s work and a number of the LifeRemix writers. I wanted to share from my own perspective, of course, but I knew there was a lot I could learn from watching these experts.

Since I just returned from ten days in Africa, I wasn’t able to attend the SXSW conference where the entire Internet is meeting this week. While I was in transit somewhere, however, I decided that I had to at least go down to meet up with some of the people I follow. I’m headed to Austin this morning and I’ll be back late tomorrow night.

I’m grateful that as my influence has grown, I’ve been able to help some of these people and add value to their own network of followers. Some of them consider me a peer now, which I’ll take as more evidence that I’ve fooled the world. As much as anything else, I trace this to careful listening and following.

The Smartest Person in the Room

To find the balance between leading and following, it’s helpful to ask yourself, “Am I the smartest person in the room?” Hopefully, the answer is no — because if you’re not being challenged by those around you, you won’t be able to grow until you make some changes. Look for people who have more influence, more intelligence, and more courage than you do.

Growth is easy for me, because in my room I am far from the smartest person. Many of the people who comment on this site are much smarter than me. I learn from everyone who writes in and many of the people I connect with on Twitter.

By the way, leadership is not an either / or position. People debate the meaning of leadership, but one thing that everyone agrees on is that leaders exercise influence. Once you have followers (of any kind), then you are a leader. Voila! You can have influence without a title, and some people with titles have very little influence.

On the other hand, a leader without any followers is just out for a walk. There is nothing wrong with starting small – we all do. But instead of talking all the time, why not take the time to listen for a while? Authenticity is a prerequisite to good leadership, at least the kind of leadership I’m interested in following.

It’s okay to be a follower, and you can even be an influential one.

How To Work 52 Jobs in One Year: Interview with Sean Aiken

To Be More Creative, Schedule Your Work at 80% Capacity

101 Stories of People with Day Jobs Creating Side Hustles

The Great Resignation: If Your Job Sucks, Now Is the Time to Stop Doing It
© 2023 The Art of Non-Conformity | Site by Bytegrow Technologies