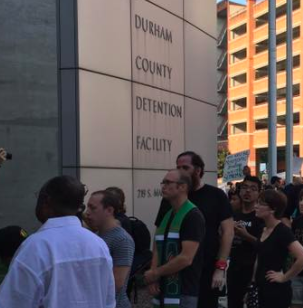 Heather Heyer. 32 years old. Her last words on Facebook were "if you're not outraged you're not paying attention." Rest In Peace. pic.twitter.com/3zVuhenkRM

“We’ll have to repent in this generation not merely for hateful words and actions of bad people, but for appalling silence of good people.” Martin Luther King, Jr.

I’ve been traveling this week but also seeing the news from home. I’m not sure I have much of substance to what’s already been said. I just want to affirm the obvious: perhaps America has received the leader we deserved, not the one who was competent, but that doesn’t mean the good people of our country should go down without a fight.

I don’t support this administration and I wish I’d done more to stop it.

To those like me with all the privilege in the world, try to consider how you’d feel without it. And if it’s impossible to have that kind of empathy, at least acknowledge your privilege. It’s a start.

To anyone who said, “Give the president a chance”—at what point does that end? Let it go.

To everyone with any sort of public platform and thinks they should remain neutral, this is a mistake. If you do nothing else, speak up and take a clear stand.

One day we’ll all be asked this question: where were you during the Civil Rights Movement of 2017?

Want to make sure you all saw this photo. It's the line of people in Durham waiting to turn themselves in for toppling the Confed statue. pic.twitter.com/2SNtWuoR64

The Happiness of Pursuit on This Morning’s Morning Joe

What to Prize Above All Else in the World: Lessons from a Soviet Forced Labor Camp

6 Discoveries from Near and Far: Volume XXII
© 2023 The Art of Non-Conformity | Site by Bytegrow Technologies