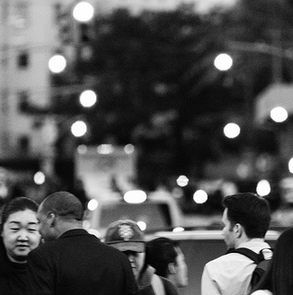 On a crisp morning in November, you find yourself waking up in the center of the universe. You look out your window and see 5th Avenue and the New York Public Library.

You step out of bed and feel the impact of three hours’ time change from the west coast. It’s 4:30am back there, your body informs you. But you have a mission ahead of you, and you can’t be late.

The previous evening you had ordered breakfast for delivery and hesitated over the selection. At first you were thinking french toast, but then you remembered that Gary Leff recommends the lemon poppyseed pancakes. You’re not usually a fan of lemon poppyseed, but you decide to trust Gary and give it a try.

The choice is a winner. Fortified for the morning, you bundle up and head out to the world. You’re on a mission, after all. You can reply to your email and read every article in the Times later.

Stepping onto the sidewalk, you put in your earbuds and set off past Grand Central. It’s a weekday morning in Manhattan and the city bustles with excitement. You are full of lemon poppyseed pancake and a large coffee.

Everyone else is hurrying along, going to work or to see the Empire State Building, a few blocks north. But your mission is different.

This mission, which you first accepted seven years ago, has now brought you to the center of a universe in search of an uncertain destination.

The task at hand is to locate an office containing a representative of Guinea Bissau to the United Nations.

When you shared the news of this task, your friends had joked, “Is that even a real country?” Truth be told, you weren’t sure either. This country was one of your last four in the world to visit, and you’ve had no luck in finding any contacts who can help with a visa.

There is no embassy for Guinea Bissau in Washington, Ottawa, or London. No visa service will take on the job. Buried in the threads of a Lonely Planet forum, a secondhand story of someone who found an office in New York that offered visas in exchange for $100 in cash is reported.

It’s not much to go on, but it’s what you’ve got. Thus you set off in search of the last known address for Guinea Bissau on the east side of midtown Manhattan.

Stopping in at the address on Park Avenue, you see a sign for various foreign missions, which bodes well. Unfortunately, the listed missions do not include the one you’re looking for. The sign reads:

The specific address you found through various internet searches now appears to be occupied by representatives from the Gambia, which also happens to be a close neighbor of Guinea Bissau. Thus you stop in to chat, asking for any info.

You are told that a year or two ago, the guys from Gambia picked up the mail for the guys from Guinea Bissau. Alas, no further news is available. “Why do you want to go there?” the man asks. You tell him it’s a long story.

You visit another office in the same building, where representatives of the U.N. are more helpful. They supply you with a new address on Lexington Avenue, where the honorable ambassador from Guinea Bissau and his secretary were last seen.

You walk to Lexington Avenue and find another empty office.

You are then directed to a third building, only a few blocks from where you began earlier in the morning.

This building proves more fruitful. Upon signing in and taking the elevator to the fourteenth floor, you see signs for many different governments.

Finally you turn a corner and come to the holy grail. On this autumn morning in New York City, the grail arrives in the form of a sign on a door. The sign reads: “Permanent Mission of Guinea Bissau to the United Nations.”

You can hardly believe your luck. Victory is in sight! Except for one small problem: the door is locked, and a knock provokes no response.

A man from the Liberian mission across the hall steps out. You introduce yourself and ask if he knows when someone from the Guinea Bissau office will be turning up.

The man says, “Yes, there is a guy … he may be coming sometime … probably later.”

You thank him for this helpful advice, thinking of the times long ago when you asked for directions on the street in Liberia. More than once the response was just as helpful: “Yes, you go down the road … then you turn left … or maybe you turn right.”

You wait for a while, reminding yourself of the traveler’s rule: the real skill lies in waiting. Most people give up, but not you. You can win the game by waiting it out.

So you wait. And then you wait some more. When you’re tired of waiting, you continue to wait.

At long last your patience is rewarded, as another man who appears to be West African turns the corner and begins walking toward the office. You look at him hopefully. “Guinea Bissau?”

The man is surprised to hear that you are visiting his country, but appears to be willing to help. He asks the all-important question: “You have $100?” Indeed, you do.

Inside the office you fill out a form and hand over a passport photo with the money. Once again, you can hardly believe your luck.

The man stamps your passport, but then grows silent. You wait patiently, because waiting is your skill. Finally the man says, “I think I made a mistake.”

You look over his shoulder where he is attempting to cover up your passport with his hand. He looks somewhat embarrassed as you peek over to see what happened.

Yes, it’s true—the man has made a mistake. He has stamped your passport with the RETURN ADDRESS of his humble U.N. mission.

For a moment you are annoyed at the loss of an entire page of precious passport space, but then you realize how funny it is. It’s even more funny when you see that the address is wrong—the address on the stamp is the second non-existent place on Lexington Avenue you visited earlier in the morning on the quest to find the current office.

“That’s true,” the man says when you helpfully point this out. “We don’t work there anymore.”

After some consideration you decide not to suggest applying a portion of your $100 donation to the purchase of a new stamp.

The man gets out the correct stamp for the visa and applies it to another page of your passport. This stamp rewards you with the prize you have been seeking on the visit to the center of the universe. And just for good measure, you tell yourself, you now have the former address of this obscure office readily available wherever you go.

For this process you have paid $100 in cash, no receipt provided. You leave the office, thanking the man who has also proffered his business card and an invitation to a nightclub where he works part-time as a DJ.

IV. The Rise and Fall

It’s hard to describe the feeling you experience upon stepping outside.

For much of the past decade, you have been visiting random offices around the world in search of permissions and plane tickets. You have been rerouted countless times; you have experienced numerous setbacks and failed attempts. But you continued to move forward, pressed but not crushed, perplexed but not in despair, as you saw more and more of planet Earth.

And now, you suddenly realize, it’s almost over. This may in fact be the last random office you track down. In recent times, the understanding that you may actually succeed with this quest has produced the occasional sense of mixed feelings, including a nagging concern over what you’ll do next.

At this moment, however, you have no such concern. You feel no more fatigue, only joy. A spring is in your step, fueled by lemon poppyseed and the realization that your dream is coming true.

In less than six months you will finish seeing the whole world.

“Hell yeah!” you say out loud to no one in particular. “The end of the world is almost here!”

Passers-by take note and walk a few steps away from you. A man grasps the arm of his companion and leads her to the opposite sidewalk.

You continue down the street with a smile on your face and a passport held close to your chest.

Later that day, part of the dream comes crashing down again. You find yourself stranded in JFK, a victim of the second big storm in two weeks.

The night begins by settling into your British Airways seat, ready to sleep for much of the flight. Most flights were canceled due to the storm, but at first you think you’ve lucked out.

The captain announces your imminent departure. “Ladies and GENTLE-men, this flight is bound for London’s HEATH-row airport.”

Except that it isn’t. You are #1 for departure, yet you wait more than four hours on the runway without taking off. No drinks are served, no food is delivered, no progress is made.

Various problems are communicated from the cockpit. The plane needs to be de-iced, but the de-icing machine has run out of fluid. Negotiations are commenced to borrow fluid from the rogue agents at Jet Blue airlines. Alas, the de-icing pump at JetBlue is no longer operable—or so they say.

For a brief moment, you imagine the JetBlue corporation as an evil Bond villain sent to foil the world traveling blogger as he sets out to visit his final countries. You decide this movie would be a big hit among all five of its viewers.

The captain notes that no other flight has left JFK the entire time you’ve been waiting. Inbound flights have been diverted to Montreal and Washington. “Ladies and GENTLE-men, it’s chaos out there tonight.”

Indeed, it’s chaos out there in the world beyond your pressurized cabin. But you’ll get there. You are pressed but not crushed, tired but not worried.

After the four hours on the runway, you are returned to the terminal at 2am. You are not allowed to disembark until 3am due to the lack of ground staff personnel. Upon gaining your reprieve at last, you grab blankets and head for a quiet space in the airport to lie down.

You finally make it to London on the next evening’s departure, 24 hours later than expected. Exhausted from the unexpected layover, you attempt to sleep on the floor again but are evicted by another Bond villain in the form of a British policeman who is unimpressed by your plight. You head to a hotel in the city and sleep away the afternoon.

All of your itineraries are disrupted and you spend the rest of the day making a new plan. But none of this matters, because you know you will make it work.

You will persevere as you have always done.

You know that the end of the world is near. And you know it will be worth it all.

The Journey to Ithaca

“My Car Is My Home, the Planet Is My Backyard”: On the Road with Bruno Caumette
© 2023 The Art of Non-Conformity | Site by Bytegrow Technologies