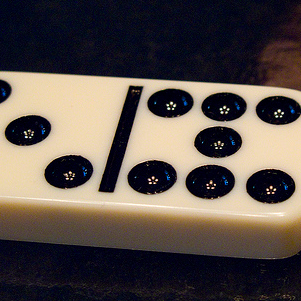 It’s not that you’re too busy, or that you’re doing too much. You’re known for taking on challenges and doing the impossible.

You know your metrics. You take pride in your deadlines. You’ve built your name on striving, and you don’t like to let people down.

You rise with the dawn, fortified by coffee and Greek yogurt. You work until mid-evening, looking forward to the occasional Knob Creek manhattan before returning to make just a little more progress on your goals.

No, “getting shit done” isn’t your problem. You are the master of GSD.

You’ve become an expert in taking on more challenges and responsibilities. In fact, when you find yourself in trouble, you think the answer is to take on even more. You may be smart, but occasionally your genius fails you.

But you do have a real problem. To understand your problem, consider the dominoes.

Not the game of dominoes, but the act of stacking up dominoes from end to end. Ever do that? Stack them all up from one end of the table to another?

Here’s the thing about dominoes. You can stack a lot of them, and you can stack them close together. You can build the most epic set of dominoes the world has ever seen. You can be the M.C. Escher of dominoes, building them upside down, through the mouseholes, around the staircase and simultaneously out of the attic. Yeah.

But let’s not get distracted. There is a problem, after all.

The problem with your life is that your dominoes are stacked end-to-end. There is no room for error.

You, the evangelist of the unconventional, require absolute conformity from these dominoes. If one piece tips over, they all fall down.

If one domino out of a dozen decides to “live life on its own terms” or “create its own future,” you’re basically screwed.

This is the problem. If everything, absolutely everything, goes as planned, you’ll be okay. There’s no time to breathe, but who needs to breathe?

You’re like an astronaut, with the day fully scheduled. Your calendar and task list dictate where to go, who to talk to, and what to work on.

Once in a while you step out from your rocket ship and look at the sky. You think, Oh my God! The sky is so blue!

But then you get back to the dominoes, because that’s just what you do.

It’s not that you’re doing too much. Don’t worry about the people who tell you to take it easy. Most of them have no idea what you’re capable of.

But do worry about all those dominoes. All of them represent someone or something you care about. The real dominoes aren’t just pieces of plastic. They are people and projects that matter.

There might be one solution. You could remove some dominoes from the middle. Space them out more.

But that’s hard for you to do, because you like to pack them in. You want to see how many you can stack up.

So what will you do? Time will tell.

“A man who wants to do something will find a way; A man who doesn’t will find an excuse.” -Stephen Dolley, Jr.

Ah, but now you’re thinking of the dominoes again. Because that’s just how you think.

Note: I wrote this for myself. If it applies to you too, watch out for those dominoes.

Thoughts on Working from the Drugstore