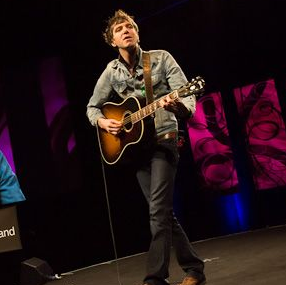 Over the weekend I heard a talk and short performance piece by Stephen Kellogg, an independent musician who was speaking at the annual TEDxConcordiaUPortland event.

Stephen talked about the joy of work. From a young age, he always wanted to be a touring musician, with fans, albums, and concerts. He loves what he does and feels fortunate to have the chance to reach audiences with his music.

One of the things he said stuck with me:

It’s better to be at the bottom of the ladder you want to climb than the top of the one you don’t.

When he started playing music, no one had heard of him and it took a long time to build a foundation. But it didn’t matter that he didn’t have the fans, albums, and paying gigs. What mattered was the chance to do it.

I felt the same way when I started writing. The early work I published wasn’t very good (and the work that I didn’t share was worse!), but it still felt good to be doing it. When I woke up in the morning I immediately thought about what I’d work on for the next few hours. At night I’d go to bed thinking about how I could improve the next day.

When I started doing events, I was terrified—but in a good way. When I got the chance to write my first book, I was thrilled! I too felt like I was climbing the right ladder, even if I was at the bottom of it, and even though I had a long way to go.

Stephen also said that it’s possible to love your work no matter what it is. He talked about a brief job he had as a teenager at a pharmacy. The work was boring and lifeless, but once he connected it to something he wanted—the money to call his girlfriend, who lived 45 minutes away and eventually became his wife—he did it with joy.

I felt the same way years ago when Jolie and I first went to West Africa to live on board a hospital ship. I initially had a menial assignment of moving boxes around and managing a warehouse, but it felt great! I loved it. The joy I felt through contributing to something meaningful greatly exceeded the menial nature of the task.

Whenever I get off track I refocus by thinking about what I’m motivated to do. Most of us complete our best work when we enjoy the investment of time and energy we put into the task at hand. But as I heard the other day, it’s also possible to enjoy it even if it’s not amazing on the outside.

Are you climbing the right ladder?

Do you find joy in your work whatever it is?

What to Do When You Have No Idea What to Do

How to Win the Career Lottery

What If All Your Work Disappeared At the End of the Day?
© 2023 The Art of Non-Conformity | Site by Bytegrow Technologies