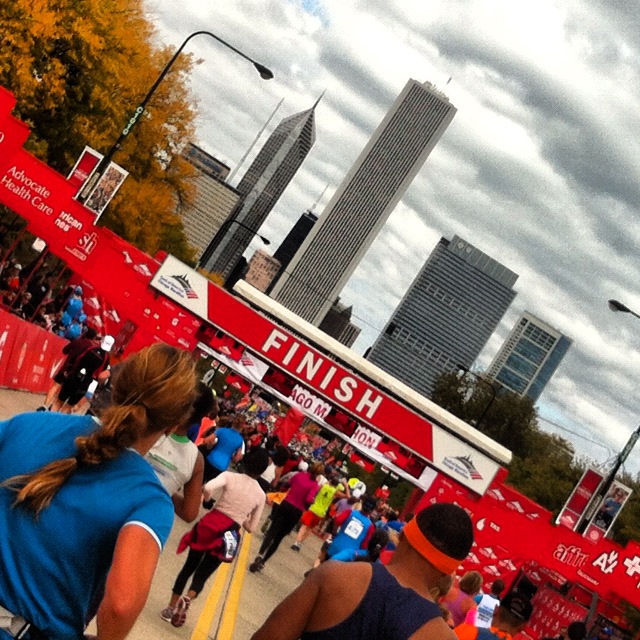 Yesterday I got up early … and ran 26.2 miles through the streets of Chicago!

This was my fourth marathon, but I haven’t done one in several years and was somewhat worried. I had been apprehensive after not being able to train as much as I should have, and also after feeling some pain in my right leg on the longest run before the race.

Thankfully, all was well yesterday. From start to finish, I felt comfortable. Even at the end, I was tired but not as exhausted as I’ve been for every other long race.

I learned a key lesson: when you run slowly, it takes longer but consumes much less energy. My time for this run was somewhere around 4 hours and 29 minutes, which is nearly an hour slower than my personal record of 3:32 in Seattle five years ago.

Despite the slow time, I was very happy with the race itself. My goal was to finish, have fun, and be in good enough shape to feel good about flying to Australia tonight.

And that’s what I did. I ran the race with Stephanie, fellow traveler and global running partner (we’ve ran in more than 10 countries together) and her brother-in-law Ty. All three of us felt good for the whole time, and when it ended we all agreed it was much easier than expected.

I also ran as a fundraiser for Girls in the Game, a Chicago charity that helps at-risk girls get involved in sports and fitness. I didn’t know much about them before the race, but I was glad to see they’re doing good work and happy to make a contribution to them.

Note: I paid the $1,250 charity entrance fee to Girls in the Game myself, without pestering other people to give toward it. If you’d like to support a great cause, however, you can do so over here.

A few people have asked how to get started running. I’m certainly no expert, but based on running regularly for most of my adult life, here is some basic advice.

First, become comfortable with running up to 30 minutes at a time, three to four times a week, even if you have to walk much of it in the beginning. Do not worry about how fast you’re running, or how much you have to walk.

If it takes you six months to become comfortable with slowly jogging 30 minutes, that’s fine. The whole point is for your body to get used to running.

It might be hard at first, but that’s why you can walk whenever you need. At some point, running will become fun, and you’ll look forward to heading out the door. There are lots of benefits of running regularly, both physical and mental, and it’s a great form of exercise you can do almost anywhere in the world.

Once you get comfortable running 30 minutes at a time, three to four times a week, that’s when you can begin thinking about goals. Do you want to run faster or farther? These goals require different training methods, and you can’t usually work on both of them at the same time.

You may then want to enter a race, typically either a 5k, 10k, or possibly a half-marathon (13.1 miles). The fun thing about a race, at least for me, isn’t the crowds of people or the parties. It’s the sense of an accomplished goal—something you work toward over time. Perhaps it’s a similar concept as visiting every country, or any other long-term project.

I don’t run a lot of races, but when I take the time to plan for at least one or two big ones a year, they help to keep me on track for regular running.

By the way, Nicole Ross has a new (and free!) ebook all about this very topic—how to get started with running. At WDS 2012, she gave a short talk on how running changed her life.

Running didn’t change my life in the same way it changed Nicole’s, but it certainly makes my life much better.

After surviving the race yesterday, I’m off to Melbourne via LAX tonight. For the rest of the week I’ll be in Australia, and then traveling further into the Pacific next week to visit Kiribati via Fiji.

Wherever you are in the world, I hope you’re doing well.

Three Things I Know Are True: Exercise
© 2023 The Art of Non-Conformity | Site by Bytegrow Technologies