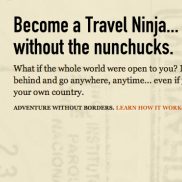 I was all set to go on national TV Friday morning to discuss travel hacking, but then I got a frantic message from the producer: “Have you been to Egypt?”

Why yes, I said, I have—not checking the news, since I was thinking ahead to the segment for which they were interviewing me. The next message came three minutes later, saying they were dropping travel hacking in favor of Egyptian riots.

Since bringing democracy to a country that has lived with a dictator for three decades is probably more important than earning a free plane ticket, I decided that decision was fair. I went back inside and changed into a t-shirt.

This is the Sunday Store Update. Before the all-consuming book tour, I used this weekend space on AONC to write about the business development side of our project. The notes in these updates aren’t designed to sell you on anything, so if you’re new here, feel free to take off your skeptic hat and just read along. (And if you don’t care about the inner workings of a business, you can safely skip these updates.)

This week I launched the Travel Hacking Cartel, my first business project in six months. There were two important elements to the project’s development:

a) The world of travel hacking is fun but overwhelming.


Most people really don’t know how to earn lots of Frequent Flyer miles without flying and redeem them for big awards, so I wanted to break it down very simply and provide a step-by-step plan. (This is also backed up by the “World’s Greatest Guarantee” of four plane tickets a year.)

For those who have unlimited time to spend, there are plenty of resources where you can spend countless hours learning everything about the inner workings of the travel world. But for those who just want to know what to do in order to take advantage of major opportunities without getting overwhelmed, there was no well-developed option… until now.

b) I wanted to create something “shareable” that people would pass on to their friends.

Creating something shareable isn’t just about putting a Facebook button on a page; you have to ensure your service is truly valuable and noteworthy. It’s good if your service is fun, but above all, it must be useful.

With the Cartel, I have a big goal to do something I’ve never done before: I want the project to grow on its own, without a lot of push from me. Other entrepreneurs out there will recognize the significance of this challenge; normally a product launch is the main source of growth, and the activity afterwards quickly falls off. It normally works like this:

Launch = Huge day! Fireworks! Everything is amazing!
Post-launch = Everything calms down and dwindles out over time

I’m fortunate that UnconventionalGuides.com is somewhat insulated thanks to the hundreds of reviews and affiliate links that are continuously published online. But nevertheless, even with our relative success we still have a big rush of sales come through during a launch, then much fewer as time goes by.

Conversely, my goal for the Travel Hacking Cartel is that most of the ongoing growth will come through word-of-mouth and the internal referral program we’ve set up. I’m happy to do media and other work behind the scenes, but I don’t want to promote the project all the time from AONC.

Will the project succeed under this model? I hope so, but time will tell. Ultimately the Cartel will be judged by the success of our members in travel hacking. As they are able to earn lots of miles and redeem them for high-value trips, I expect the results will speak for themselves.

I’ll do a “behind the scenes” of the Cartel update in another month or so, and from time to time I’ll mention deals that Cartel members have taken advantage of, but overall we’re going to see what we can do without using AONC as the main platform. Fingers crossed!

You can check out the Cartel over here if you’re interested. We had a few technical glitches during the initial launch day (as always happens), but everyone is settling in nicely now and we have a lot of fun things coming up. Over here on AONC, this week we’ll be back to regularly-scheduled updates with no further business promotion for a while.

Behind the Scenes of the Travel Hacking Cartel

How To Get What You Really Want