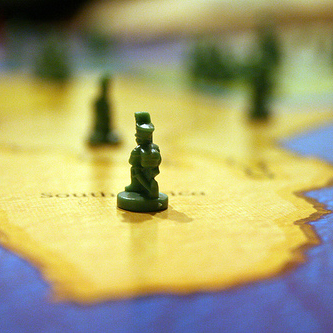 I recently posted a question to readers about what to do in an uncertain airport situation. This was the scenario:

You arrive very late at an airport you haven’t been to before. Security takes forever, but the flight is on time—which means you’re even more rushed.

You walk into the terminal and look for your gate: A70. Damn … you’re currently at A18. Above you is an “Express Train” that runs between A1 and A75 with an unknown number of intermediate stops.

You know if you take the escalator up to the train and catch a ride it could be faster—but remember, you’re unfamiliar with this airport.

Will you have to wait for the train to arrive? How much faster will it actually be? Might it be better to hoof it?

You can’t just stand there and think about it forever… remember, time is short. You have only ten minutes to get to A70 before they close the flight.

I greatly enjoyed reading all the responses, which came in a range of perspectives. Readers were fairly divided on the answer. A majority said they would hoof it, but a significant minority said they would take the train. A few others had unconventional ideas that were fun to read.

I also tend to fall on the “choose the action you are in control of” side, and not just when I’m running late at the airport. Upon arriving in the downtown area of an unfamiliar city, I’m happy to walk for an hour with my bags… as long as I know where I’m going. When I’m lost, which happens often, I get incredibly frustrated with myself. In the case of the airport scenario, I hoofed it—and I made it to the gate just in time, sweaty but triumphant.

I don’t think this approach is always right, though.

Sometimes I notice similar situations where it would indeed be better to take the train, stop and figure out my surroundings, or whatever the equivalent decision is. For example, our internet went down at World Domination HQ (also known as my house) recently. I was frustrated and didn’t know what to do, but instead of trying to think it through, I used my iPhone as a connection for a while and then went outside to the nearby coffee shop for two hours.

Since I work online for much of the day, it was frustrating to lose the one thing that I absolutely need to function. Meanwhile, Jolie came home and spent five minutes figuring it out before it was working again. Ignoring the problem—my approach—was clearly not the best answer.

Showing up in Eritrea without a visa last week, I felt I was once again approaching the “walk or take the train” scenario, albeit with higher stakes. If something went wrong, I could be put in jail or thrown out of the country—which is exactly what happened in the end. But sitting on the tarmac before disembarking into uncertainty, I had a thought:

It’s not the outcome that matters. It’s the decision to act.

Most of us judge the outcome of a course of action, not the intent. Consider a guy who performs a dangerous stunt on a motorcycle. If it goes well, we think he’s brave, courageous, a badass. If he fails or is injured, we think he’s stupid, foolish, and deserves what he gets.

In the case of Eritrea, I wasn’t responsible for an outcome that was largely outside my control; I was only responsible for the decision to go. Perhaps it was a foolish decision, but I knew I had to take the chance.

By the way, thanks for the flood of input last week about whether the Eritrea adventure “counted” for my quest. Strong opinions were expressed from all sides, but it looks like a 3-to-1 majority voted in favor.

I also understand and appreciate those who disagreed with the majority. If I can get back to Eritrea at some point later, I will, but for now I’ve got to work on my 13 remaining countries.

As the plane touched down and we taxied to the remote stand where I’d hop on the shuttle bus and prepare to meet the officials, I asked myself: How am I feeling?

I had a lot of nervous energy, I really didn’t know what awaited me on the other side, and you know what? It felt good.

I resolved then that whatever happened, I was glad I had taken the risk. A few hours later as I was being marched back to the plane to Cairo with handlers who had confiscated my passport, I was exhausted and unsure how I’d find my way out of Egypt—but still glad I had made the trip.

It’s not the outcome; it’s the decision to act.

Questions to Ask When Pondering a Big Life Choice